The XXXI renewal of the prestigious Clasico Internacional Del Caribe was held on Saturday, November 28, 1998, Santa Rosa Park in Arima, Trinidad & Tobago; the first occasion in the
history of the Clasico that such has been held outside of a Spanish speaking country.

As if to show solidarity with Trinidad & Tobago, 13 of the Caribbean's best 3 year olds representing a record nine countries, lined up in the starting gates for the 1800M test.

Ironically, High Security came to Trinidad with an unbeaten 18 win sequence vying for the first prize of $147,000 (US).  The Ali Ayubi trained colt made every pole a winning one,
however he drifted out in the stretch and hooked up in a duel to the wire with the Panamanian Triple Crown hero Evaristo, by Tupido a son of Runaway Groom. An objection lodged by
Jesus Barria rider of Evaristo, resulted in the disqualification of High Security, who was relegated to 2nd position.  The son of Big Bass had also broken the track record for 1800M at
Santa Rosa – 1.53, set by Sian's Gold in 1994 and equalled by the locally bred Da Vinci in 1996; recording 1.52:2 in the process, however the record will not be honoured. Jaime Lugo
was aboard High Security, who had previously raced exclusively at Santa Rita in Maracaibo where he carried all before him.  The big bay colt is bred similarly to the great Cigar, as he
is a grandson of Seattle Slew, out of a daughter of Palace Music; the same cross, though in the reverse, which produced Cigar.

Evaristo came to Trinidad with a record of 6 wins from 10 starts including the 1998 Triple Crown in Panama.  He was clearly hindered in the stretch run, but dug in gamely, going down
by only a short head.  An objection lodged by Barria against the winner resulted in the placings being reversed and victory for Panama, the country's 8th in the Clasico Del Caribe.
Huracan David from Venezuela was third and Baton Rouge (Panama) fourth.

An appeal to the Trinidad & Tobago Racing Authority, the regulatory body for racing was disallowed.

Roberto Arango, trainer of Evaristo and fourth placed Baton Rouge, was registering his second Clasico success, having scored with the filly Angelical at El Comandante in Puerto Rico,
in 1996.

Fifty minutes earlier, the 5 year old mare Steffany's, trained by Panama's Champion Trainer, Alberto Paz Rodriguez, won the XI Confraternity Cup in honour of John Derek Cozier,
Co-Ordinator for Trinidad & Tobago on the Caribbean Racing Confederation for the past 21 years. Also ridden by Jesus Barria who was registering a unique double, the bay daughter
of Screen King got up close home to defeat the Colombian colt Dark Dinner, who had been 4th in the 1997 Clasico at La Rinconada in Caracas, Venezuela; by a neck.

The home team from Trinidad & Tobago did not measure up to par, but did earn small slices of the purse with Champion 3 year old Braveheart, finishing 6th of 13 to Evaristo in the
Clasico, and Adoring Groom 5th in the Confraternity Cup.  Both are grandsons of Blushing Groom, being sired by Freshly Squeezed, a half brother to Graded Stakes winners
Touch Wood and African Dancer

Popular racing journalist Chris Lincoln was a special guest speaker at the Annual Assembly of the Caribbean Racing Confederation, held the day prior to the Clasico A special on the
two feature races was aired on 'Racing Digest' on ESPN 2, on Wednesday, November 9

Breeding buffs would appreciate being informed of the bloodlines of the 1-2-3- in the Clasico Del Caribe '98.

Evaristo, the 3 year old Triple Crown winner this season in Panama was awarded the top spot in the Clasico Del Caribe.
The grey son of Tupido was bred by the Haras San Miguel of Carlos Eleta Almaran, and foaled on February 22, 1995.

Evaristo is a son of the American bred Tupido, out of the mare De Repente.  Tupido who is sired by Runaway Groom, a son of Blushing Groom, was a Stakes winner in Panama, and is
a half brother to listed winners Sasscat and Robannier in the USA.  He  was produced from the Northern Dancer mare Home From The Fair. Tupido's third dam All Beautiful produced
Arts and Letters, winner of the Belmont Stakes in 1969.

De Repente is a daughter of Super Moment out the Hoist The Flag mare Queen's Banner.

High Security, the popular Venezuelan colt from Maracaibo, came to the Clasico with an unbeaten sequence of 18 victories.

A son of Big Bass by Danzig out of the Seattle Slew mare Sunny  Slew; High Security was produced from the Palace Music mare Queen Avalon by Cox's Ridge.

Palace Music is best known as sire of the great Cigar.  It is  interesting to note that High Security carries a similar cross to Cigar, with Seattle Slew appearing as grandsire of
Big Bass (3rd generation), and Palace Music as sire of Queen Avalon (2nd generation)  High Security also carries a cross of Northern Dancer (3 x 4).  Huracan David, which closed
for 3rd place in the Claisco, is a grandson of Epsom Derby winner Roberto through his son Roberto's Dancer.

Roberto's Dancer was produced from the Mt. Livermore mare One For Livermore. Mt. Livermore is a leading sire in the USA, and is also a son of Blushing Groom. 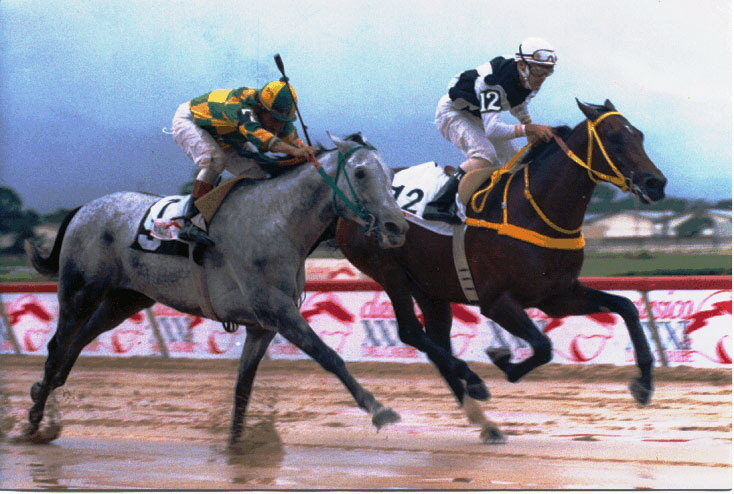